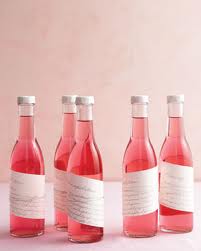 A really funky Wedding Favor idea is a Bottle of Raspberry Infused Vodka with a Recipe Label stuck around the Bottle .

The Vodka Recipe could ideally be for a Raspberry Martini, such as a Raspberry Cosmopolitan.

You can buy pre-mixed, store bought Raspberry Vodka, but they tend to be white in color.

To look more stunning, you can make your own Raspberry Infused Vodka, which will cause the Vodka to turn a pretty shade of pink.

You could even have your Bridal Party get together with you to Infuse the Vodka and then later Bottle and Label the Vodka!